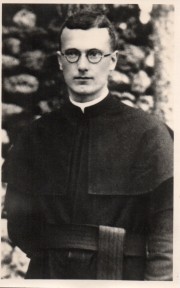 He was born on 1 February 1903 in Feldkirch, Austria, and grew up in Bozen and Innsbruck. He followed God’s call and was ordained a priest in 1928, after which he entered the Pallottine community. In the time of his Novitiate in Untermerzbach near Bamberg, Germany, he got to know and appreciate the Franconia region in Southern Germany.

Later he was given a variety of tasks in his community and finally discovered Fr Kentenich and his Schoenstatt Movement, which had a profound influence on him.

When Hitler came to power, he took a stand, and as the only German priest refused to take the soldier’s oath on the flag for reasons of conscience.

Shortly before he was arrested and was transferred to a Berlin prison, he visited Bamberg on a number of occasions. That is why the people of this region have a special devotion to him.

On 21 August 1942 he was beheaded in Brandenburg, Berlin.

His process of beatification was opened in Trier in May 2013.

That was the case in the Third Reich, because he was outspoken and clearly declared that he was a Christian.

It applies today at a time that needs such people who boldly go their way in opposition to every form of conformism and lack of commitment, and follow their inner voice. Not radical on the left or right, but radical in love and wholly orientated to Christian values. Such a prophetic protest can cost a person his good name, his friends, and even his head.

The price is high, but it is worth it in order to live in freedom and with character. That is why the youth room in Belmonte will be named after Fr Franz Reinisch.

Blessed and sent out

During the audience of the Schoenstatt Movement on the occasion of the centenary of the covenant of love, Pope Francis also blessed a picture of Fr Reinisch that is destined for the Reinisch Room.

It was a blessing and mission – for all who will one day talk, think, discuss, laugh, dream, pray, plan … in this room.

That is bearing witness. It is also good that there is a Reinisch Room in the International Schoenstatt Centre in Rome. It is good that Fr Reinisch’s witness has moved people to start to finance the room. 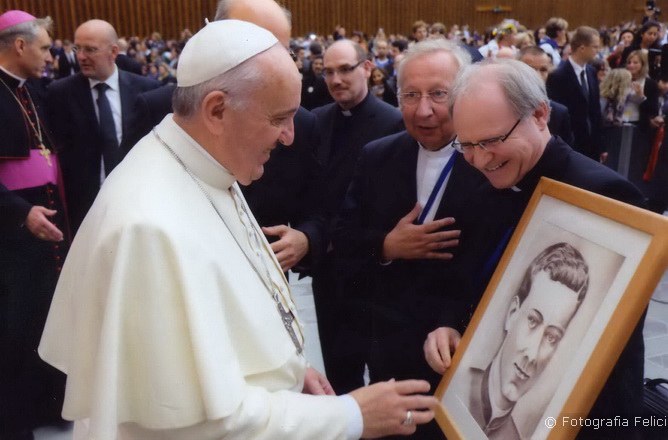 25.10.2014: Pope Francis blesses the picture of Fr Franz Reinisch, for the Reinisch Room

The Reinisch Room is fully financed.

“Live in such a way
that others will be interested enough
to ask: Why?
Testimony.

There is nothing more that can be added to this.

We are nobody's saviour.
We are transmitters of the One
who saved us all.

And we can only transmit this
if we take up the life
of this someone called Jesus
in our own lives, in our flesh, in our history.